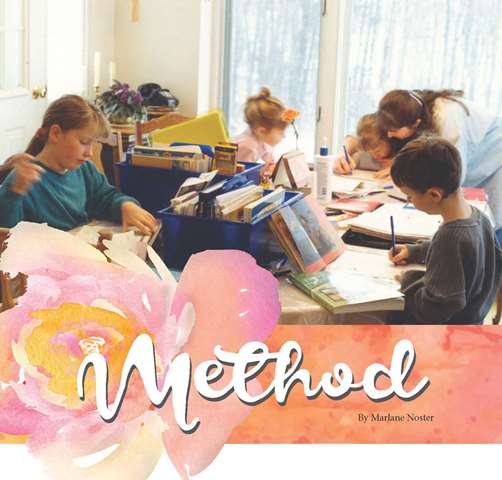 I was somewhat thrust into home schooling without a great deal of preparation.  About all I knew was that I had the right to teach my children at home, and in my first year I simply brought home all our daughter’s textbooks from school.  It soon became clear that importing the school into our home wasn’t going to work very well so, in our second year, I copied both method and curriculum from another home schooling family.  This whole time, in an effort to research what other options might be available, I spent a lot of time reading books on education in general and some on home schooling.

In year three I chose alternate curriculum, but was still by-and-large tied to a schoolish format: number of minutes per subject, per day, sitting desk-like at our dining room table.  About this time, I began to become aware of learning styles and the fact that children learn differently.  Our daughter, for example, was proving to be a global learner and seemed to thrive best when she was allowed to keep a number of different threads running in her head at the same time.  This meant I needed to allow her to have different learning activities and projects going concurrently.  Could I do it?  I was a person who liked to finish one thing before starting the next, and I really needed to work against my instincts here.  Meanwhile, I recognized our son was likely a kinesthetic learner, and that would mean reducing desk work and allowing as much movement or activity as possible.  This, too, went against my grain.

During this time of learning how our children learned I became somewhat concerned about how to accommodate diverse learning styles while still employing this schoolish approach.  I compromised in what seemed like the best solution at the time: using our “free” time to teach with a more relaxed style, using an abundance of interesting materials and “extras”.  What followed was rather graphic, even if I didn’t want to admit it quite yet.  It was becoming increasingly clear that my children loved the afternoon work and vacillated somewhere on a scale between unhappy to distraught with the morning learning.

How long does it take for a mama to learn to let go of “the way it has always been done?”  Well let’s see… my family continued increasing in size, the children kept changing, and there was a constant and intense pressure from the outside to conform to the norm.  We carried on the best we could, until I attended a conference and learned about ‘shepherding the child’s heart.’ Of course, the heart!  I had been focussing on so many things that I was sometimes neglecting the most important part.  I realized that the heart of my children meant more to me than the opinions of others, my own discomfort and fears, and inconvenience.  Relationship was key if I as a parent wanted the heart of my child - and if I wanted the ability to ‘shepherd’ them to their full capacity.

Time was going to be a factor, because it was important to deal well with issues that would come up; always plentiful.  Certainly we still needed to inform our children and help them develop skills, but the how - the method - became a more organic process tailored more to the personality, learning style and even the experiences of each child.  Math facts could be learned on the bicycle or on the trampoline.  Writing assignments could be completed on the roof, history could be discussed with the whole family on a picnic blanket.

The child who liked to fill out workbooks could do that to her heart’s content and one who learned best by overhearing others being taught could learn while she doodled.

It was clear to us all that everyone in our home became more at ease, our enjoyment of one another improved, and the joy of learning began to return, all because I became willing to bend myself to the best method of training the heart, the mind, and the will of each of my children.

I still got in the way sometimes by wanting to control my life, thereby exerting too much pressure on my family.  Often my life seemed like it would be much easier if they were to “just sit there and get it done.  Don’t waste time being creative.”  But now I knew differently.  It wouldn’t be long before I would be back to my senses, remembering that I wanted a soft-hearted child more than a ‘finished’ child.

And that has made all the difference.

Marlane Noster is the co-founder of WISDOM. She successfully home educated her 6 children through high school, and now enjoys watching the 9 school-aged of her 15 grandchildren repeating and reinventing the process.