When I was a kid, we had screentime. Our device was a B&W TV with three channels and one was in French. If you’re sitting there wondering “what device is a B&W TV?” that’s because it was before your time, and if you’re nodding your head saying “Yeah I remember,” you are old… I mean, old-er. If you wanted to see a movie you had to go to the movie theater. That changed with the advent of new technology and what is called “user controlled content”.  User controlled content is where the individual using the device can control what they see and hear. With changing technology the user has gone from just simply using the device, to interacting with the device, and finally immersing themselves into the device. (I’ll clear things up later regarding the last one.) 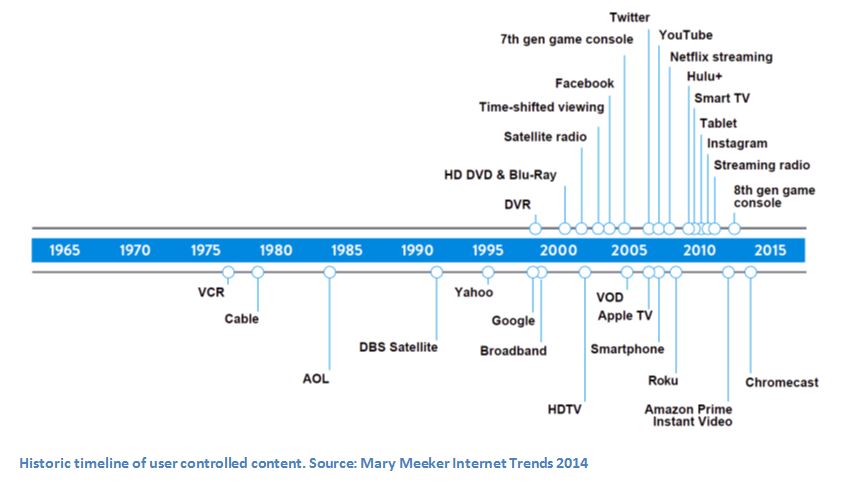 Screentime is a thief that has crept in little by little and now dominates many homes, pushing time for other things out. What is screentime? Screentime is all of the time an individual spends in front of a device with a screen: i.e. a TV, computer, Smartphone or tablet.

In 1975 the average Canadian watched just a little over 3 hours of TV daily (Source: Statistics Canada).

If you compare that to today, the daily TV screentime has actually gone down. But think about it. In 1975 there was only TV. Today Canadians daily spend 1.73 hrs on TV, 1.62 hrs on Laptop/PC, 2 hrs on Smartphones and .85 hrs on Tablets.

This chart represents 70% of the world’s population.

Combined, this works out to the average Canadian aged 16 to 44 spending 6.26 hours on screens daily. Yes, you read that right: over 6 hours a day. It’s hard to believe, but how about this stat from Public Health Agency of Canada?  Canadian youth in grades 6 to 12 spend an average of 7.8 hours a day on screens, NOT including school. 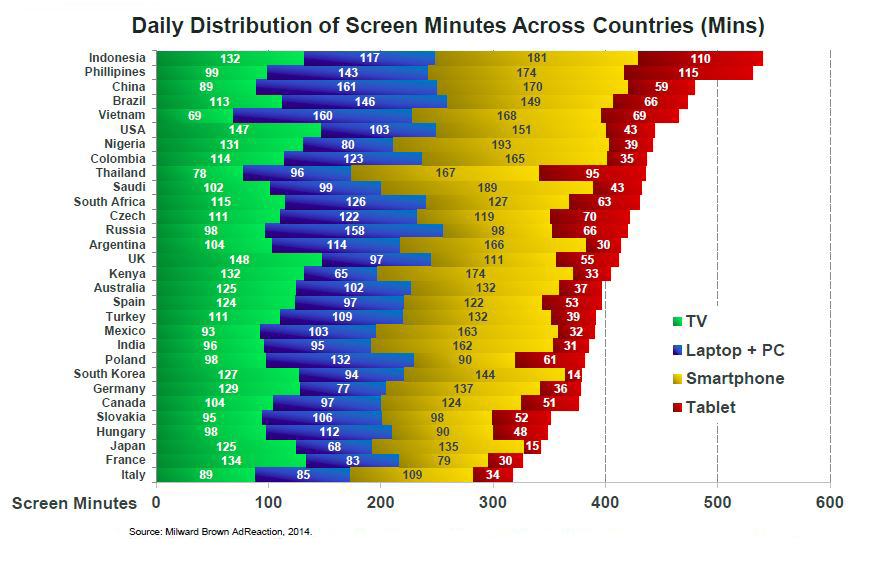 Here is a statement that no neuroscientist will dispute; the brain wires itself according to the tasks imposed upon it and the greater the time spent on a particular task the stronger the wiring. It’s the old “Neurons that fire together wire together” fact.

What is all this screentime doing to the wiring of our brains? It would be foolish to think that it is doing nothing; it’s just not possible from a neuroscience point of view.

To be honest, I don’t know exactly what it’s doing and not even the experts really know at this point. After all, it’s pretty hard for a scientist to objectively observe the grand experiment when they themselves are in the experiment with us.

Overall I see a trend (and it’s just my opinion), but I posit that user controlled content is rewiring the brain to have a shorter attention span.

I also need to point out here that the stimulus level is artificially created and not reflective of natural, everyday real life.

Before you look at the official screentime recommendations from WISDOM, I need to define screentime a little more. What? You already looked at them? Were you jumping… around?

I like to break screentime down into three different types: Passive, Interactive, and Immersive.

Passive Screentime
TV and Movies. Specifically, there are network, satellite and internet TV, DVD movies, Netflix and YouTube videos. It’s basically screentime where you’re not doing anything except watching the screen (and maybe eating).

Immersive Screentime
Three dimensional virtual reality or VR. This is the new one just around the corner, and it is the one that will allow you to “immerse into the device”. It is slated for the big promotional push and release for early 2016.

It is considered the final platform of computing and by far the most powerful yet. It is the “holy grail” as stated by the CEO of Oculus Rift, a virtual reality headset manufacturing company owned by Facebook’s Mark Zuckerberg. Hmmm… why would Facebook want to get into VR? In 2014 there were 6 companies dedicated to VR and now in 2015 there are 26, and the number is increasing.

What exactly is a virtual reality headset? A VR headset is a device that you place over your eyes in order to exclude any outside visual input, rather like headphones that go over the ears to exclude all outside auditory input. The VR headset has two lenses and two high definition screens, one for each eye, which is what gives you a three dimensional effect. Your field of view is 360 degrees; and not just left and right, but up and down too. You don’t even have to keep your head stationary, as the VR headset tracks your head movements and you can look around in any direction. What do you see? You see exactly what you see in the real world, or rather your brain perceives the visual experience as reality. Now combine the VR headset with headphones and a motion platform and you have… immersed into a new world where the limit is the imagination of the software designers.

Is VR exciting? Sure is. The potential is mind boggling. Am I excited about immersive screen time? At first yes, but the more I think about it the less excited I become. Will it become an even more powerful thief of time? How could it not?

If we have grown adults addicted to interactive screentime, to a point where it affects their jobs, marriages and health, what will immersive screentime do? How will it wire the brain of our children in their most formative years? Neuroscientists don’t know; no one does. The dangers are unknown. That’s why Samsung recommends that children under 13 not use their VR product. And we know that children under 13 always read the instructions, right? 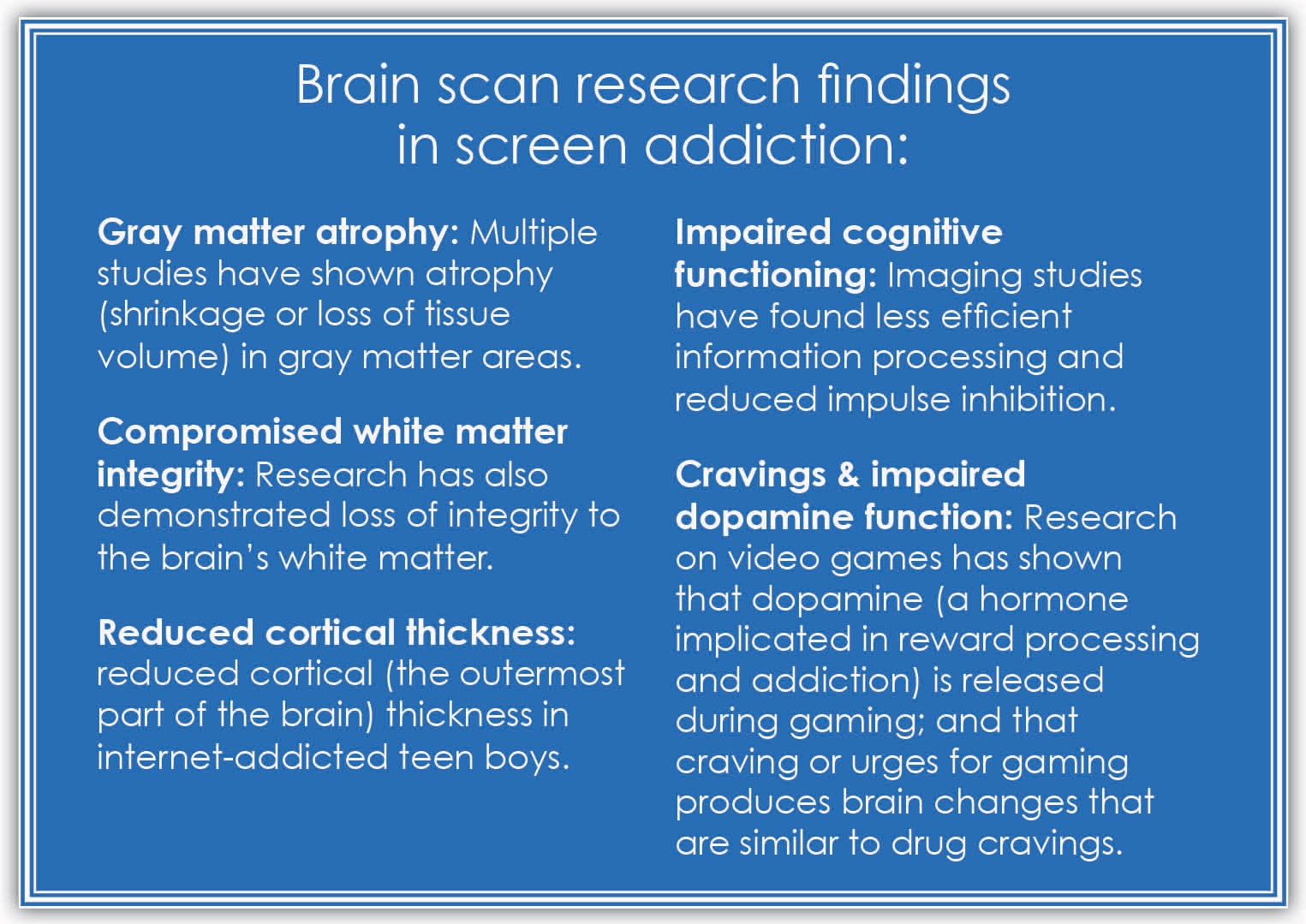 manity. But I see much danger in becoming an early adopter of VR and I strongly recommend that parents don’t allow their children to become part of the experiment. If you do become an early adopter of VR, you and your family are the “test subjects”. I advise parents not to let it through the door at least for a few years to see how all those “test subjects” are doing. Caution is the word here. No one knows how immersive screentime will re-wire the brain. No one knows how it will wire the brain of children in their most formative years (0 to 6).

What are we as parents modeling when it comes to screentime? Do I consider what I model to my children? Do they understand something different from what I am saying by what they are seeing?

Did you know that vision is the number one sense that the brain uses to interpret the world around it? Yep. 30 percent of neurons in the brain's cortex are devoted to vision, compared with 8% for touch, and 2% for hearing. 2% for hearing! Did you hear that? Being responsible as a parent is “walking the walk” and also “talking the talk”. Take out the walk and it’s just all talk. Here is a thought: take out the walk and your influence is just being perceived at 2%? That’s a scary thought.  We parents are responsible for modeling our talk. Modeling is even more important than what we say to our children in many areas.

Long term research is showing that what we model to our children greatly influences their formation of critical character traits such as self-control (delaying gratification). The studies have also shown that the best way to teach self-control is to model it when the child is in their most formative years; 0 to 6 years old. But don’t despair if you think the opportunity has been lost or give yourself a high five because you think your job is done, because what you model to your child is still massively forming them after the age of six as well.

Here is another thing to think about. 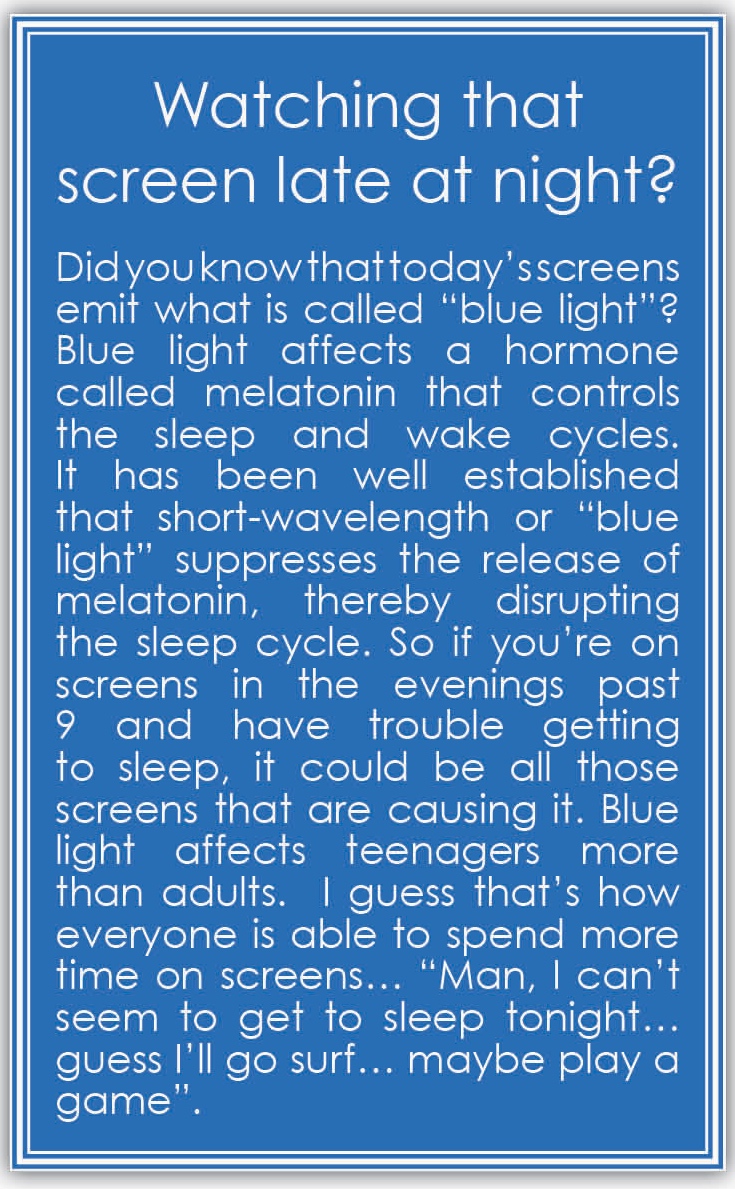 What is being modeled to them on that screen? Is it in keeping with your moral beliefs or the faith that you want to pass on to them? What is being modeled to you on that screen? Is it affecting how you think? You will need to decide how much screentime is healthy for you and your children, and I believe that if you have no standards set, now is the time to do so with the new technology scratching at the door vying for your attention.

You have your children in their most formative years. The time is limited. Screentime takes away from time needed in other areas of development that are more important for children, such as creative play. We are social beings wired to function in the real world, not a pseudo-reality world. Children need to spend time in the real world for proper social development.

Model responsible screentime to your children and set standards to how much time they spend on screens. The time you have with your children is limited; use it wisely.

A year from now when you have forgotten this article… okay a little too optimistic. A week from now… did I hear you say tomorrow? Ouch, that hurt. Either way, if there is anything you remember, remember this when it comes to your children:

The path you model marks the footsteps they will follow. 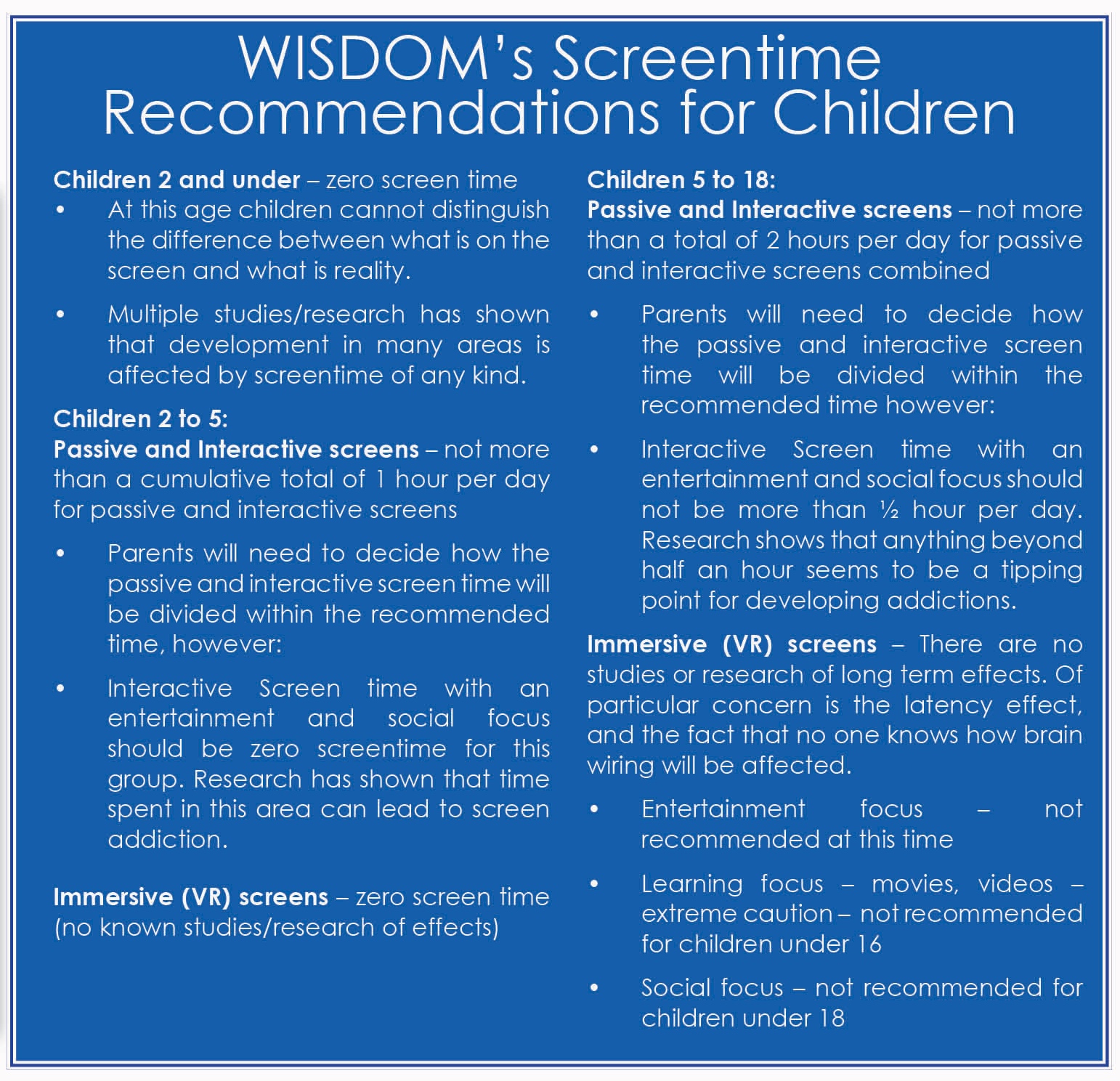 John Hoekstra works for WISDOM HomeSchooling in the Mediated Learning Program, undertaking the Dynamic Assessment component. John and his wife Liesbeth have been married 23 years and have eight children. They have been home schooling for 16 years.You may write to John about this article at This email address is being protected from spambots. You need JavaScript enabled to view it.